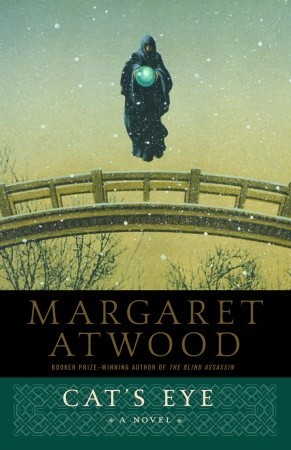 Cat's Eye is the story of painter Elaine Risley told chronologically from two points in time. Elaine has returned to Toronto for a retrospective of her work.

As a small child, Elaine and her brother traveled nonstop with their parents. Mr. Risley was a biologist and lived, with his family, constantly on the move, studying insect life. Elaine had no concept of how girls behave together or what it's like to be and have a girl friend. She's known only an older brother for a playmate and has never had a need for dresses or other girly accoutrements.

When the family settles down in a real home of their own, Elaine learns all the good and the bad of being a girl. Making friends proves fairly easy, surviving the evils of girlfriends is much harder. The damage done by these girls matches up with a lot of the mean girl stuff we've been hearing so much about. Girls are pros at psychological warfare and these girls are no exception.

First Elaine was friends with Carol and things were just fine. She found what it was like to have a girlfriend and the experience was positive. Then they added Grace to the equation and the dynamic changed. Now the two girls were competing for Grace's attention but, it was still friendly. They tried to win favor, but there were no attacks, nothing mean spirited. Enter Cordelia, youngest of 3 girls, rich in comparison to the others and a new and fresh face in the neighborhood. Cordelia worked things a little differently than the girls were used to. She establishes herself as the queen bee with a campaign of pressure and humiliation. Elaine's unfamiliarity with the intricacies of being a female adolescent makes her the easiest target. At the height of Cordelia's reign she goes too far. This is a turning point for Elaine. She turns her back, rises above it all and moves on, seemingly like nothing happened. But, she is greatly changed by her experience.

Despite their history, Elaine always keeps an eye out for Cordelia. A couple of times Cordelia seeks out Elaine, forcing her to come face to face with the direction Cordelia's life takes. Cordelia still has some kind of hold over Elaine, but it's nothing like the power she had before. In fact, Cordelia is the loser in the situation, as Elaine takes control of her own life and moves forward.

Elaine Risley is a complex and well written character. She is smart and talented and flawed. The wounds to her psyche and the way she deals with victimization give a clear picture of the turns her life will take and how it affects her art and her life. This book is the original Mean Girls, and Atwood's genius shows through in her depictions of women wronging other women. As far as we feel we've come, the peeks Margaret Atwood gives us of the failings and foibles of our sex are illuminating and educational.

I find it so hard to believe that until relatively recently I hadn't read any of Ms. Atwood's works. I'm sure I'm not finished with her yet.
Posted by JoanneMarie Faust at 12:23 PM

i was out looking for harry potter sites to get ideas for mine... and somehow landed here. still haven't figured out the search engines. anyway... looks good.
harry potter merchandise