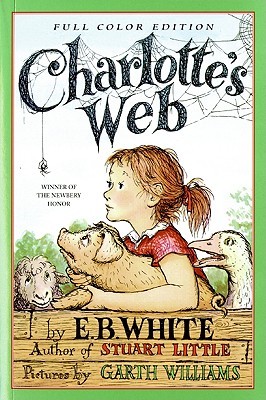 Not surprisingly, this book is on a lot of best books lists, including the Harvard Bookstore Top 100. I don't know how anyone could not love this book. I've heard that there is a live action Charlotte's Web, starring the ubiquitous Dakota Fanning, but I'm not sure I can see her as Fern Arable. It could have to do with the fact that the cartoon version is a classic and I'm not sure how well the live action version can possibly compare. I hear those voices in my head when I read the book. Paul Lynde will always be the voice of Templeton the rat, Debbie Reynolds is Charlotte and Fern is that girl from the Curiosity Shop and Felix Unger's daughter from The Odd Couple.

Anyway, one day on the Arable Farm, the spring pigs are born. Mr. Arable is ready to put down the runt when he is stopped by his daughter, Fern. He agrees to give his daughter responsibility for the tiny piglet. She names him Wilbur and feeds him from a bottle and, basically treats him as something somewhere between a doll and a puppy. Fern grows to love her sweet little pet and cares for him so well, that pretty soon he can no longer be thought of as a runt. Once Wilbur gets too big he needs a new home. Fern's aunt and uncle, the Zuckermans, take Wilbur in, and Fern goes to spend her spare time visiting Wilbur and his new friends at the farm, once he gets settled in, which takes him a little time. Of all the friends Wilbur makes, Charlotte is his first, and the best.

I think I like best that this book doesn't shy away from the realities of life on a farm, but overcomes them The people are good and kind and understanding. Fern understands what the animals are saying and if what she says, when describing it all to her family, makes no sense, no one is very concerned. They don't assume she's crazy. They recognize common sense, and they accept it, even when it comes from a very uncommon source.

As a pig, Wilbur's destiny, after surviving runthood, was to become ham, bacon and pork chops. As you can guess, Wilbur is less than nonplussed when he understands that his survival this far is no guarantee, but just bought him a little time before he becomes the main course. Luckily, Charlotte was more than just clever and talented, and in order to save Wilbur from a normal, average pig's fate, she takes action.

The idea of friendship and how important it is, is conveyed beautifully in this book. Even the rat with his "looking out for Number one" attitude shows some friendship and loyalty, when it comes right down to it. All of the barnyard animals coexist peacefully and enjoy each other's company. They provide moral support for one another. They celebrate all their happy moments and grieve together when things go wrong. These are some of the most healthy relationships ever written.

Since everyone knows the story of Charlotte's Web, it would be silly for me to outline it here. There is a lot to be considered, like the range of emotions and the goodness of the characters, as well as the whole coming of age and life cycle plot line. Birth and death and all points in between are covered. Wilbur is born and overcomes the odds and survives. Fern goes from the little girl who raises Wilbur like a baby to the one who races off to ride the ferris wheel, holding hands with Henry.

Wilbur is still young and alone when he is comforted by Charlotte's voice and her promise to be his friend. Charlotte keeps Wilbur company, helping him to get used to his new surroundings. Later, her creativity and ingenuity secure his future. Charlotte's friendship means so much to Wilbur that he returns the favor for generations. I don't think it gets much sweeter than that.
Posted by JoanneMarie Faust at 10:07 AM