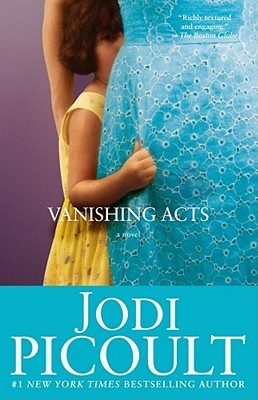 Cordelia Hopkins works with her bloodhound Greta in search and rescue. She has a daughter, Sophie, with her fiancé Eric and lives, along with Sophie, with her father Andrew, who runs a senior center in New Hampshire. Delia, Eric and their friend Fitz have been inseparable since she and her father moved to New England after Delia's mother died. Although, Delia has always felt the loss of her mother acutely and imagined what she would be like and how she would help her through life, she had a great relationship with her dad. She thought she knew all there was to know about her life, but she was wrong.

Delia begins to have strange dreams which seem more like memories, but that don't make much sense to her. She explains them to Fitz, and being a reporter, he does some digging which leads to the arrest of Andrew Hopkins for kidnapping Delia when she was four years old. Delia asks Eric, who is a lawyer and a recovering alcoholic to defend her father. Andrew is extradited to Arizona for the trial. Eric follows to get legal credentials and sponsor (legal) there and Delia and Sophie follow when Eric finds them a place to stay. Fitz goes to cover the story for the paper.

There are way too many story lines here. You have a lifelong love triangle between Delia, Eric and Fitz. You have Eric's crappy childhood because of his alcoholic mother and then his subsequent alcoholism. This gets played against Delia's mother, Elise, and her struggles with alcoholism and Delia's engagement to alcoholic Eric and Eric's difficulties staying sober with the stress of representing his fiancé's father, for kidnapping her. Whoa! I just read that over and, well, yeah, that's a lot of stuff going on. But, wait, that's not all. You also have Fitz feeling responsible for getting Andrew arrested and being assigned and expected to write a story about Delia's painful situation, all while being in love with her since childhood. Then there is a whole Indian (Native American Indian) storyline, that is totally superfluous. Not that it wasn't a good story, because it was. It's just that it deserved its own book and didn't belong in this one.

There's also a Mexican storyline, as Elise is Mexican and a whole cultural thing, which I wasn't sure why it was put in. This was just a hint of something that felt like maybe it should have gone somewhere, but didn't. Considering that Elise's story is important, I would have thought that there would be more than a few Spanish words and a witchy, psychic kind of thing that is considered, by turns, shameful and a gift that runs in Elise's family. We also have a sexual abuse red herring and a whole huge weird prison thing, including bad rap lyrics and prison shower hi jinx. I've got to tell you there is just way too much going on here.

I think, due to the sheer volume of reading I've been doing, I've grown a lot more critical. I don't think it would be fair to call me a snob, because there are plenty of books that I love that have little or no literary value at all. I'm not ashamed to admit that I loved a book that will never stand the test of time. I own all of the Stephanie Plum books by Janet Evanovich. I love them. I reread them and listen to them on audio over and over.

I'm having a problem with authors seem to feel the need to over describe everything, and poorly at that. I recently saw one of those things that goes through everyone's e-mail inboxes. It was a list of descriptive sentences from the writings of college students and they were hysterical. I get the impression that somehow these people were paid to continue writing. Piccoult is definitely guilty of the over description thing. Eyes are the blue of fevered glaciers... umm, huh?

This book was written from each of the main characters' points of view. Like Extremely Loud and Incredibly Close, but not done nearly as well, this tells overlapping stories from all pertinent character's view points. On the audio, there are five different narrators. The Delia narrator had a really grating voice and I wasn't crazy about Fitz's voice either. The Eric and Andrew voices were okay, though.... Except there are fake rap lyrics that the Andrew voice recites that are really bizarre.

Piccoult has another blockbuster (are popular books blockbusters?) out , My Sister's Keeper. I've seen/heard good and bad things about it. I'll probably get around to reading something else of hers, to give her a real chance. This could have been a couple of good books, but the book it wound up being had too many disjointed stories, not particularly well told. The mystical story lines, the Mexican bruja (ooh, I hope that's the witch word and not something naughty. My Spanish is very rusty!) and the American Indian myths, practices and beliefs could have made fascinating reading and I would have enjoyed the stories if they had gone anywhere, but they wound up going nowhere and just clogging up an already crowded book with so much more ephemera.
Posted by JoanneMarie Faust at 9:09 AM