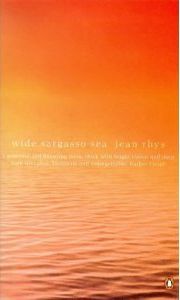 Wide Sargasso Sea is the second book in my "all things Jane Eyre" phase. This is Bertha Rochester's story and Edward Rochester's, and told from the perspective of Bertha, the crazy wife from the attic at Thornfield Park. In fact, Jane does not appear in this book at all. Rhys does take quite a bit of liberty, combining major historical moments in the islands with her story. She includes as part of the story line, the racial tension in the islands and the unrest after the end of slavery.

Apparently, Rhys grew up in the islands and moved her story to Dominca and gave Bertha the name Antoinette Cosway . The Masons are her stepfather and stepbrother. Antoinette Cosway is a white Creole, hated by whites and blacks alike. Former slaves are resentful and have no problem taking it out on the family. She has an unbalanced mother, a seriously ill brother. I'm not sure if he's physically ill, mentally ill or developmentally delayed, or exactly how he is afflicted. He just seems to be someone not meant to be long in the world, and isn't.
Antoinette's mother marries Mr. Mason, and the family hopes desperately that he will relocate them, but that is not his intention. Then, someone burns down the house. The brother who can not save himself, perishes in the fire. The mother, already on the brink of madness, slips cleanly over the line and is institutionalized. Young Antoinette is sent to live with an aunt and sent by her stepfather to private Catholic school.

Antoinette lives a solitary life with minimal contact from any relations. After she finishes school, her stepfather sets her up with a man portrayed, at least partially, as a gold digger, but who has some standing in England. This is the Rochester character from Jane Eyre, but he is never named. It is known that his father does not wish to separate/divide his estate and so is leaving it all to his eldest son. The younger son is given the hand of a wealthy business associate's daughter because she comes with substantial property and a sizable bank account.

I, with my modern girl mentality, have difficulty with this bizarre inheritance structure. Not to mention some experience with the raiding of large estates, to the detriment of real and valid heirs, but that's a story that's still too painful and frustrating to tell. I've read all the Jane Austen books. I remember how the Dashwood girls and their mother were practically destitute when the father died in Sense and Sensibility. On a totally unrelated note, has anyone seen the Amex commercial with Kate Winslet outlining her film career? I love that ad. I think most companies should be forbidden from advertising because they are just polluting the airwaves with the lamest crap ever, but that commercial is great. Oh, sorry about that. Now, back to our regularly scheduled book commentary. Rochester's father just couldn't be bothered with dividing up his holdings? So Rochester took on daughter status, sort of, didn't he? Hmmmm. They even set him up in the "money marriage." Just how much did the senior Rochesters know about Bertha "mad as pants" Mason? They found the Mason's who have a history of major mental illness (at least according to Bronte's book) and they railroad Eddie to the altar. He spends no time with her alone. They whisk her out at balls where she smiles and twirls and then they take her away. Rochester explains that she was a beautiful stranger on their wedding day. Once they were alone he began to see just how crazy she was, or saw her begin to quickly unravel when she was separated from the comfort of all that she knew.

Here, Rochester is partially portrayed as a gold digger and a little as a naive lovesick boy. He traveled to a strange land, got really sick and then, while recovering, and still in a weakened state he marries this beautiful intriguing woman. She takes him back to the place where she is most comfortable, and where she is surrounded by people who know how to care for her. Not that they like her, because these are hostile and unwelcoming folks. The servants care for Antoinette but most are very resentful and they treat Rochester with contempt. It is an odd household. The servants take care of Bertha/Antoinette, but none of them like her, in fact, they seem to despise her. Only Christophine cares for her truly. She's taken a motherly responsibility for her. She's also been, I guess it would be considered, "medicating" her to keep the symptoms of her mental illness at bay.

Rochester is definitely portrayed as a cad. I really really (I get paid by the word. Okay, I get paid by the superlative. No, I don't get paid at all) like Bronte's Rochester. He's smart and he's kinda funny. To look at him (as described by his creator, of course) he seems dark and dour. He's not physically attractive, but he's got character and personality and intelligence. He and Jane are ideally suited. A mushy man would make her uncomfortable with her psycho-social history. (Yeah, I put in a few years in human services.)

The Rochester I know and love, Bronte's Rochester, isn't cold. The people around him get him. They see that, where it counts, he is a pretty good guy. I'm glad he got found out and that Bronte hit him with the Karma train. He didn't marry Jane and let her be part of a sham marriage. He lost her as a consequence of his subterfuge. Then he risked everything trying to save Bertha, the woman he saw as personification of his foolishness. The woman, who, even before Jane, was a symbol and a constant reminder of how he sold his chance for happiness and love. You've gotta love that you get all of that in this chaste and virtuous tale.

I was prejudiced against Bertha because of my adoration of Jane. I didn't want to like her and I didn't like my Mr. Rochester getting messed with, but I did feel a little bad for the crappy life Rhys gave Bertha. I'm still not sure what her real intention was. Her Bertha can't be the one that Charlotte Bronte intended. Rhys' Antoinette/ Bertha suffered greatly. I don't know if Rhys clarified the story, or just muddied the waters.  I can absolutely concede that, however it happened, it was a hard and frightening road to the top of that burning building.
Posted by JoanneMarie Faust at 10:50 AM