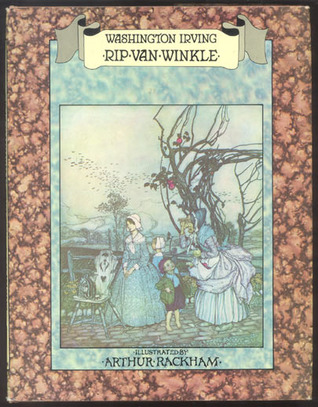 This was assigned reading for my American Lit Class. I can't imagine that I'll be posting much from my classes but I had a strange reaction to this story. My brain took the story and paralleled Rip Van Winkle with my father. It's crazy, I know, but my brain works in its own way. Can a mind have a mind of its own? Probably not, but who really knows what we do with that 90% that we don't use.

From the beginning of the story, Rip Van Winkle is very popular with everyone in town but Mrs. Van Winkle. He's always got a story to tell and he's very helpful to others. Somehow, he just doesn't have much ambition and he resents that he feels tethered by responsibility. In the story Dame Van Winkle is portrayed as the unsympathetic one. Most of my classmates had no feeling one way or the other about Dame Van Winkle, but weren't so crazy about Rip either. I, on the other hand, was sympathetic to both of them.

My father was a really good guy. He wasn't a total slacker who couldn't/didn't provide for his family. I had a great childhood. My Daddy was handsome, he was tall with blond curly hair and blue eyes that got all sparkly when he was happy. He always looked perfect. His shoes were always shined and even his sweats had creases you could cut yourself on. The man had style. He had personality. He always had a tale to tell. He didn't have a lot of patience, but he made things exciting.

My dad was never a very ambitious man. He did pretty well for quite a while. I never wanted for anything. My parents gave my brother and I everything we ever asked for. We went places. We saw and did things. We skied, we had a boat we took out on the St. Croix and Mississippi Rivers. But Daddy took some pretty bad career hits and was totally thrown off his game. His heart wasn't in it anymore and he slowly stopped trying. The responsibilities of work and the chance for disappointment outweighed any risk taking excitement.

My mom didn't work until after my brother and I were in high school. I wouldn't necessarily refer to my mother as ambitious, but only because, I think that term when applied to my mom would be almost offensive. She's type A, very smart, a really hard worker, a perfectionist. She never tried to take over the world, but she has always been very capable and honest and lovely. My father's personality and hers combined ran the gamut from polar opposites to perfectly compatible.

In our subject story, Rip Van Winkle goes off one day for a walk with his dog, Wolf. As he wanders about he sees some strangely dressed men bowling and drinking. Rip winds up spending his day playing bartender for the men and helping himself to drinks. The next thing Rip knows, the morning sun is shining on him. What he doesn't realize is that he'd been passed out for 20 years. He returns to find a very different world, but it is the embodiment of a dream for Rip. He's now at an age where he would not be expected to work. His adult daughter, her husband and their young son, Rip, take him in. Rip, Sr. spends his days doing just what he wanted to do. He becomes something of a local legend, entertaining the villagers with his stories. Dame Van Winkle is gone, and he is glad, since she apparently embodied the chains of responsibility. He can now feel free to be the guy he wants to be and not be subjected to guilt for his failings as perceived by his wife.

My dad got really sick in 1997. He was diabetic and although he produced some insulin his pancreas didn't produce the enzymes that metabolize food. He wasn't taking care of himself and he got a stomach virus, which threw his electrolytes and everything else out of whack. A combination of pneumonia, and his body's inability to store any nutrients and an allergy to penicillin (apparently, the best antibiotic to treat pneumonia) it was only a strong heart and kidneys that were keeping him alive. He didn't seem that sick at first. He got a stomach virus and you know how you kind of shy away from food when it just keeps coming back up? Well, that's what he did. My whole family got the same nasty bug, followed by an upper respiratory infection. In Daddy's case it became pneumonia, which turned into a blood infection and he had no saved nutrients in his body. He went to bed weak and through the course of the night he got more and more disoriented. I convinced my mother to call 911 in the morning. By morning he was constantly babbling nonsense. If you asked him a direct question, he answered it, but you had to really listen, because the answer was part of the constant chatter. He was laying in bed and plucking at nothing. He was picking up imaginary bits of something that he was afraid that a dog that wasn't there would get. I kept taking handfuls of nothing from him to throw away. He plucked and talked for probably 36 hours, before it was just his lips and hands constantly moving and no sound coming out. The doctors said that he couldn't stop, but I never understood why that would be so.

Over the next few days he got progressively worse. They gave him blood, because his was so depleted. All those fresh platelets went right to work, formed a clot and my dad had a small stroke. They put him on a ventilator, because they thought if he didn't have to work to breathe, his body could use all of its energy in the healing process. the ventilator required a sedative, which made him sleep for days, as we sat by his bed and watched a machine do his breathing for him. After 26 days in intensive care and a couple of weeks in a rehab facility, he was home. According to the doctors and nurses, he was like a medical miracle. None of them expected him to survive.

With the full agreement of all doctors and the Social Security Administration my father was deemed not fit for work. All this validation and the weight of responsibility lifted from his shoulders, my father was free to be the man he wanted to be. He developed an amazing relationship with my niece, who was born a couple of weeks before he got sick, and with my nephew when he was born a couple of years later. My niece called him Pop and that's who he was, we all referred to him that way, and it was his best role in life.

My dad found the perfect position for himself, he was the greeter at our community pool. He was a man who loved to be near water and in the sunshine, surrounded by his adoring public. The ladies shared all the neighborhood gossip with him. The little kids got his attention for all their new tricks and he shared his snacks and microwave popcorn with them. The teenagers talked cars with him, and shared crazy stories. After pool hours, he would sometimes stay a little late and let them jump into the pool with bikes and skateboards. Or, he'd let them have a supervised pool party with pizza and soda delivery and music. Together with the teens and older kids in the development, he came up with a haunted house and Halloween party that was popular for the first time ever.

In Irving's tale there was a lot of symbolism. Rip went down for the count when the colonies were still ruled by England. He was looking to get out from under the oppression of responsibility. He wanted freedom. He woke 20 years later to find the colonies had won the Revolutionary War to become the United States. Although times were more complex than when he went to sleep, he was free to start his new life. The fledgling US had a lot of work ahead of them but they were free to form the new country.

I just saw my father while reading this story. I couldn't see Rip as a shiftless idle man and Dame Van Winkle as a mean old shrew, because I understood that she wanted her husband to do right by their family and I know that button pushing that goes on in relationships. I got these characters in a different way than most people probably do, and I found myself liking them more than other people who read the story. I'm not sure how much time Rip Van Winkle had left after he awoke (and coincidentally, that was the first question my mother asked when I told her my thoughts on this), but we got seven really wonderful years with my dad that we probably didn't have coming to us. You can call me greedy, but I wanted more.
Posted by JoanneMarie Faust at 3:52 PM

What great insight you applied to this classic tale. And what a mature, kind, loving perspective you have on your dad and your mom. I enjoyed this a lot.

Thanks for coming by my blog. Hope you'll be back, Jersey Girl.

Thank you so much! I really appreciate your kind words on my post. I enjoyed your site as well, besides, anyone who is pro-Jersey is okay with me!