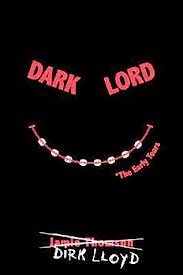 With a title and cover like that, how could you not want to pick up this book.   The dark lord, after a battle with his nemesis, Hasdruban, awakens to find himself turned into a human child and laying in a pool of very nasty black goo in a parking lot.  He has no idea how he got there or where his powers have gone, but no matter how he looks at it, he's nothing more than a little boy.  When asked his name, it is assumed that he's saying he is Dirk Lloyd and so, here on earth, that's what he goes by.

Dirk Lloyd/The Dark Lord just wants to regain his powers and return to his home planet or dimension, or where ever it is that he's come from. All the humans see is a little kid who thinks he's someone he can't possibly be.  They can't find his family and they wind up turning him over to social workers, psychologists and a foster family.  At first his foster brother, Chris is really happy with having another kid in the house, but Dirk is interesting.  Probably completely looney tunes, but interesting. So, Chris joins in the fun.  Dirk is trapped and doesn't know how to convince people he is who he says he is, or how to get his powers back and return home.  So, he makes do and makes friends.  None of them are too sure if he's for real, but it's kind of fun playing along with Dirk. Besides, just enough inexplicable stuff happens to keep them all guessing.

After all of the kind of heavy kids' books I've read recently, I was kind of unprepared for Dirk's story.  In fact, all of the professionals are convinced that this kid suffered a horrible trauma and that he's blocking it out and taking on this new persona.  I found myself hoping that Dirk was for real, because I dreaded finding out what horrors a little boy would have had to face to get lost in that particular fantasy. I guess kids would just think all the adults were idiots, and thank goodness for that.  In this case, I support that theory wholeheartedly.

This book was a lot of fun.  Dirk and Christopher and Sooz are terrific characters and I really liked their friendship.  Thomson keeps you and his cast of characters wondering until the end, just what is real and whether or not Dirk can find his way home.  I won't give a way the end, but this is the first time in quite a while that I was excited by the fact that a book I was reading was the first in a series.  I'll definitely be coming back for more of Dirk's adventures.

Bonus Extras:  Here is a link for an interview on reading.org with Jamie Thomson.  And, even better, he's the book trailer.  Enjoy.

Posted by JoanneMarie Faust at 8:21 PM