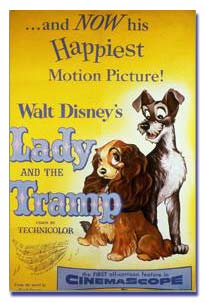 As you must be aware from the millions of dollars the fine people over at Disney have spent to make sure that no matter when you watch television, or what channels you watch, you know that Lady and the Tramp is being re-released on Disney DVD. I have a little sculpture (I'm being very generous with the word sculpture here) of the spaghetti scene, which we all know is a classic. My aunt bought it for me when I was first seeing Sparky because although he was always talking about how much he loved to cook and all the things he could make, he usually fed me spaghetti. (Everyone's realization of this had Sparky get creative in the kitchen for me to prove them all wrong, but that was a disaster. I'll have to make that another post.) I love that little "sculpture."

My mother is incredibly fond of the movie, not only because it's so cute, but because she swears that Tramp looks just like the Miniature Schnauzer we had growing up, Schnapps. Yeah, I can see that. We consider Schnapps to have been the best dog ever, but apparently, no one else remembers him that way. It could have something to do with the fact that he only liked us and small children.

Anyway, the Handsome Honey and I were watching tv the other night when the commercial came on for the rerelease of Lady and the Tramp . I was just thinking to myself how sweet it was and they were showing the spaghetti scene, you know this one when we wound up having a kind of strange exchange. It went sort of like this:

HH: What is that? How can they make a movie with that stuff in it?

HH: No, every cartoon with animals is anthropomorphic, this is perverse.

Me: How is it perverse? It's so sweet. They are on their first date and there's the plate of spaghetti that's really just one enormous noodle and then they accidentally kiss. Look, he pushes the last meatball over to her with his nose. That's adorable!

HH: But did they show you the dalmatians making out? I don't think they did.

Me: I don't know Honey. I have less of a problem with that sweet accidental kiss than I do with the one noodle concept. Who ever heard of a huge mountain of spaghetti that wound up being just one noodle? How do they get that thing in the pot?

Luckily, the commercial is only 30 seconds long and the moment passed, leaving the conversation to just peter out. We tend to notice and feel the need to converse on the strangest of little things while watching television.
Posted by JoanneMarie Faust at 12:39 PM