I watched season one of the USA series The Dead Zone last week. Anthony Michael Hall does not qualify as fantasy boyfriend of the week. Sorry. On the cover, he looks downright creepy. But, I do like him much better than I did in Edward Scissorhands where he was such a jerk, and, he has come a long way since he was Farmer Ted and the original Rusty Griswold.


The Dead Zone is based on the Stephen King book, which, along with the original movie with Christopher Walken, I remain very vaguely. I was enjoying the series. I like when characters have more facets and dimensions. So often, on tv, at least, the good guys are human, but the bad guys are infamously superhuman, totally bad. They aren't very interesting to watch. I like that everyone has bad and good all mushed up inside of them, leaving almost anything in the realm of possibility. Here, the people seem very human and interesting. I'm a sucker for those kinds of things that we all wish were possible, or wish that we could do, but sadly accept that they aren't real or possible at all.

Up until the end of the first season's episodes, I was liking the characters and, despite the overused stern look that is forever appearing on Johnny Smith's face, I even liked him a lot. Then, they did something really weird. The penultimate episode of the season has Johnny getting tried for witchcraft in Salem, Massachusetts. Too campy. Too lame. The final episode of the season was better, though, also another dredged up from the campy coffers plot, with a Native American who shares Johnny's gift and they see each other through time and save a tribe of American Indians from being incinerated by a meteor some 500 or 600 years ago.


The other stuff I've been watching: 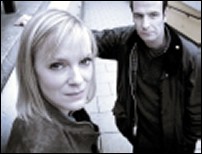 Two seasons of Wire in the Blood that I watched on dvd. That Robson Green guy won't make my fantasy boyfriend list, but I love him as Tony Hill anyway. He would go on a fantasy friend list. I would definitely want to pal around with him, figure out what makes him tick, have long discussions on intuition and evidence and all that fascinating stuff

* ~ Beach Girls a Lifetime network miniseries with Rob Lowe and Julia Ormond. It was okay. I watched the whole thing the other day while I was painting my bedroom. I think it's only been sticking in my mind because I stayed up lated to see it through, so it was the last thing pouring into my brain before bed.

* ~The Libertine ~ I'm pretty glad that I was facing away from the television the entire time this was running, it was seriously bizarre. I love Johnny Depp and to watch him play a guy who starts losing pieces to syphilis is not pretty. In fact, bleah!

So, that ends todays episode of Piksea's Couch Potato Chronicles. I hope to be back with something of more interest to say soon.
Posted by JoanneMarie Faust at 10:04 AM