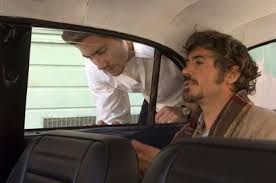 The Handsome Honey, who was totally not imaginary this weekend, and I went to see Zodiac last night. It was star studded, not with the usual big names, I guess, but with stars that I love. Who can resist Robert Downey, Jr and Mark Ruffalo? Not I. It starred Jake Gyllenhall, but also included Donal Logue and Ione Skye and Clea Duvall and Chloe Sevigney.

So, the movie is based on Robert Graysmith's book on the Zodiac Killer. I read the book about ten years ago, or so and found it well written and interesting. I guess it must have been when I was reading a lot of true crime books. The movie was very interesting and covered a lot of ground, but it was soo long. Maybe it's just me, but I don't think that you need to make a movie last two hours and forty minutes when you aren't going to at least catch the bad guy. The Zodiac killings remain unsolved.

There were some very interesting tidbits, though. The movie is based on Graysmith's book, but they didn't exactly paint him in the most favorable light. It's not that he was unlikable, but he certainly came off as being unliked. I loved when people let him in and opened up to him, but his personal and professional life was a mess.

I found it hard to believe that the cop they based Steve McQueen's Bullitt on wore bow ties to work. Although Mark Ruffalo had a fabulous raincoat.

The hair piece took 15 years off of Anthony Edwards. It was like seeing him the way he was in all those movies when I was a teen. Gotcha! and Revenge of the Nerds, even Top Gun. Amazing how much that can age you.

All in all, good movie, great cast, a little long, but certainly interesting source material.

That is what's rattling around in Piksea's head today!

Posted by JoanneMarie Faust at 1:55 PM

I think, and think sincerely, that you should revive your blog!
Revive, I say!

I always like to see Mark Ruffalo in movies. He's a good actor and very easy on the eyes.

I watched part of this movie only because of Jake Gyllenhal. I never finished it, like you said it was just too long haha

I love your blog!
www.deardanielleadvice.blogspot.com