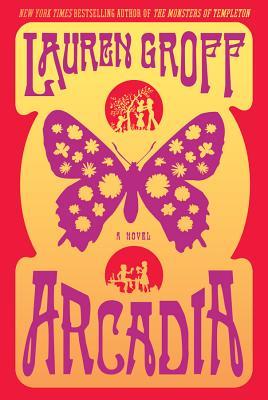 I just finished reading this book last night.  Much like Ms. Groff's first book, The Monsters of Templeton, it took me forever to plow through this.  Not that I didn't enjoy it.  I really liked this book, as much as I did Templeton. I'm not really sure why it took so long to get into this.  Don't imitate me, people. Don't just wade into this one, take the plunge, submerge yourself in Groff's world. You won't be sorry.

Ridley Sorrel Stone, only child of Abe and Hannah, born in a caravan on the way to create a Utopian commune called Arcadia.  He was a preemie and so tiny, he wasn't expected to survive. Nicknamed Bit, for the little bit of a person he was.  But, the name is deceiving. Bit is only small in stature. He is huge in heart and smarts. The book follows Bit through his life, from first birth of Arcadia, through the rise and fall of the community, into his life out in the world, his loves and his losses.

The commune Arcadia was started by a man named Handy and a handful of followers looking to create a better society. They intend to be self-sufficient and live communally as equals.  But, that's a ideal that is frequently wished for, but never attained.  The Arcadians, people from all walks of life, who desire this better world for themselves, work together from vans and trailers to create a home and life. They are vegan, grow their own crops, make their own bread, completely gut and rehab the mansion on the property for their living quarters. They make sure their children are educated and everyone is responsible for themselves and each other.

This is the story of Bit, who was born with Arcadia, watched its demise and eventually found his way out into the world. The children of Arcadia are his friends and the children are raised much like siblings.  Although, there are family units, the work and the teachings are spread out by ability.  They live as a large family and the core group may have been able to live their lives in peace as they desired. They certainly worked for it.  I don't want to be all spoilery, but  Arcadia eventually falls, scattering its people to the wind, Bit and his parents among them.

I loved Bit, his heart, his imagination, his deep, personal connection with the land and his people.  If  you haven't read this book yet, do... and let me know what you think.
Posted by JoanneMarie Faust at 10:35 AM