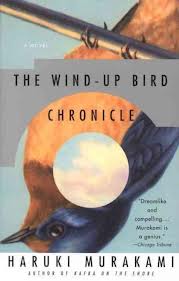 Kimberly at The Book Barista is hosting Monday Musings.  This week's topic is Books in Translation.  Now, this is quite a topic. What do I really know about translations?  Sure, I tell people that I translated Don Quixote from the original Spanish to English and this is kind of, sort of, technically true.  But, it was also in Spanish 3 or Spanish 4 in high school and considering my complete inability to master the subjunctive.  I may have translated the words, but certainly not the feel of the text.

We've all read those books that are translated so poorly that you can not derive any pleasure for the reading.  A lot of the great classic works have been extremely hard for me because of this. Stilted language and all the extra opinions about what was being said, over the course of time since the texts were written work together to suck every last bit of joy from the experience.  I often feel like translator bias can color the work as well.

Then, I read Haruki Murakami's The Wind-Up Bird Chronicle and I was amazed.  The language was so beautiful.  I can't imagine that anything could have been lost in the translation.  Now, Murakami is a genius and he translates books from English into Japanese, but he doesn't translate his own books, which, I guess, is kind of a head scratcher, or maybe it's just more of his genius.  If you've read any Murakami, you know that his books are beautiful and surreal and the language can totally transport you into the world he's envisioned. I found that it wasn't even just this book, but Kafka on the Shore, and 1Q84, and After the Quake. Well, that list just goes on and on. They weren't even all done by the same translator.

I listened to the audio recording of Jo Nesbo's The Snowman, a taut thriller which is part of Nesbo's Harry Hole series and it didn't sound translated to me at all.  Then, there's the Millenium Trilogy (The Girl With the Dragon Tattoo, et al) and those translations seemed natural.  And the world seems to get smaller and smaller every day. Many differences between us fade away, as we discover how many more of us lead similar lives than we ever imagined before.

Strangely, I read Roberto Bolano's The Savage Detectives and found the translation to be so stiff. In my mind, if I can learn some Spanish, it must be really easy.  There are plenty of Spanish speaking people who are completely fluent in English.  A huge percentage of Americans speak Spanish, and the work is modern, so it makes no sense to me that it seem so bland and stiff. Although, I am in the minority, because people love this man's work. I'm not sure, in the case of this book, I am the best reference.  I intend to give it and the subsequently/ posthumously published books of his to take the lit world by storm. Hopefully, the experience will be better. I want to immerse myself in a three-dimensional world, filled with sound and color and emotion, and to do that books are my transportation of choice.
Posted by JoanneMarie Faust at 2:14 PM

Thank you so much for joining Monday Musings and for such thoughtful insight. I've added The Wind Up Bird Chronicles to list of books to read. Wonderful post!

Hi,
I'm Carmen Stefanescu from:
http://shadowspastmystery.blogspot.ro/
I signed to follow your blog. I'd be glad if you could honor mine, too.
I live in Romania, better known as Dracula's country. I am a teacher of English and German in my own town and country.
I am on Goodreads and Book blog too!
Best regards,
Carmen

There are parts of this book that I will carry with me for the rest of my life. You can't say that about a lot of a books.

Kimberly, I'm glad that you've discovered a new book. I hope you enjoy it. I really enjoyed where your Monday musings topic took me. I look forward to participating again.

Carmen, I'm now following you. I'll look to friend you on goodreads, as well.

Ryan, it was a game changer for me. It's really nice when you find one of those books that leaves you with something like that.