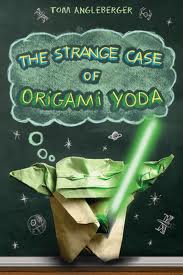 To date, I have read a total of four Tom Angleberger books and I will be fast to pick up anything else he writes.  Especially if it is part of the Origami Yoda series.  Such fun, sweet books.

The Strange Case of Origami Yoda
Dwight is kind of a strange kid.  He's the boy who dances to the beat of his own drummer. He has a rich interior life and it tends to overflow into the exterior world. He's also really good at origami.  Things change for Dwight, Tommy and the rest of their sixth grade class after he makes and demonstrates his origami Yoda.   Origami Yoda gives great advice through Dwight, to his classmates.  The question lingers, is origami Yoda for real?  To answer this question, Tommy puts together a case book, taking on each instance of origami Yoda giving advice.

This book was just too cute.  The kids are very relatable, and the fact that Angleberger gave them all the ability to respect each other, including for their differences.  He gives multiple sides to the stories and not everyone gets a happy ending.  I think this series is great for middle grade readers. 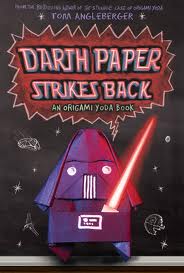 Dwight and his origami Yoda have been suspended from school and it is looking like he may not be allowed to return to McQuarrie Middle School with his friends.  His mom is not letting him see his friends and the kids are upset and confused by what is going on.

To make matters worse, Dwight's biggest detractor, Harvey has created an origami Darth Vader and its advice is far less positive than Yoda's.  Tommy and the gang all take turns creating their case for letting Dwight come back to school.

Once again, Angleberger shows the generosity and kindness that can be found in children. 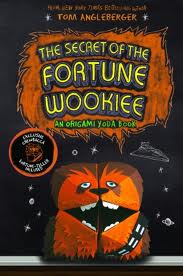 The Secret of the Fortune Wookiee

The McQuarrie Middle School gang is back, but without Dwight.  It's been decided that he shouldn't return to McQuarrie and his mother sends him to a private school.  Dwight, when he's allowed any access to his old friends, claims to like the new school, but has stopped doing origami. Actually, it seems like he's lost his essential Dwightness.

Tommy has a friend at Dwight's new school and she paints a pretty dire picture.  Dwight is labeled "special" and there is an awful lot of thoughtless tolerance.  Everyone has been informed that Dwight is special and they all "love him",  but none of them bother to know and like him.  The positive attention is just what Dwight's always wanted and deserved, but even he knows this isn't right.

The "does Dwight need saving" waters get muddied when Sara comes to school with a cootie catcher that looks like Chewbacca and claims that it is from Dwight and that it's a Fortune Wookiee.  This would lead the kids to believe that Dwight really is okay where he is and maybe they should leave him alone and not make trouble for him with his new school.    The big questions is how Sara is giving such good advice.  There should only be eight fortunes in the wookiee, but more kids than that get advice from Chewbacca, without repeats.  How can this be so?

Once again, Angleberger paints a picture of engaging and creative children and shows how they can work together to solve mysteries and problems.  Great series.  I definitely recommend these for any  middle grade readers. 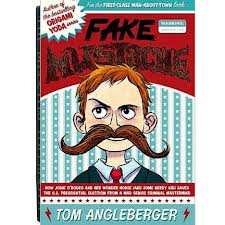 This was just an incredibly silly book.  Lenny is a good kid with a good family and a crush on a tv cowgirl, Jodie O'Rodeo. One day Lenny and his friend Casper  go to Sven's Best Price. Casper spends his allowance on a fake mustache, made from real hair and a fancy suit. The next day, Lenny wakes up to find that there's been a bank robbery. He goes to see Casper and sees his room is filled with bags of money.  When Lenny reports Casper as the robber, he only winds up angering his now ex-friend.

Pretty soon, Casper with his disguise begins his plan to take over the world and, particularly, to ruin Lenny's life.  And, he's doing a pretty good job on both counts. He fills his coffers with stolen money, starts winning big in the political arena and even Lenny's parents believe their son is a low down, no good scoundrel.

When things get really bad, Lenny dons a disguise of his own, his favorite singing cowgirl and winds up running into her on the bus.  As he's explaining to her what he's doing, they are both captured and then Jodie and Lenny team up to stop Casper.

This is pure fantasy, not a thing realistic about it.  That doesn't stop it from being funny and engaging and a very fun ride.
Posted by JoanneMarie Faust at 9:46 AM

I have never heard of this author, but I bet my son would love those books with the Star Wars covers. I am going to be on the look out for them now. I am a new follower to your blog. Please follow me back at sychofaeriesbookobsession.blogspot.com Thanks!

Thanks so much for the follow Sycho Faerie. I'm already following you and I've added you to my blogroll. The Origami Yoda series is very good. I hope your son enjoys them. They even include detailed instructions to make the origami characters!