Creature from the Seventh Grade 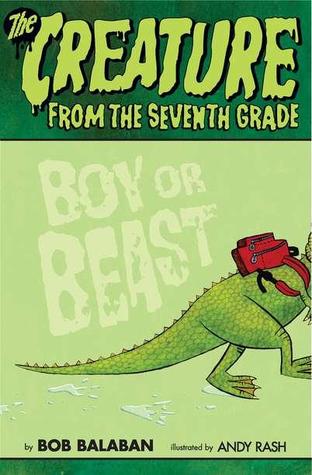 The Creature from the Seventh Grade: Boy or Beast by Bob Balaban
Read: 2013

Charlie Drinkwater is 12 years old, short for his age and definitely not cool.  His older brother is a football star who is smart and popular.  Charlie does have two very good friends and a family who loves  him.  He has a crush on one of the popular girls, but she only knows he's alive to tease him. Then, one day, Charlie wakes up feeling strange. By the middle of the school day he has metamorphosed into a large green, prehistoric creature.  What's really weird is how all the different  parts of his world react.  His parents are not at all surprised. His older brother is kind of a jerk because he's no longer the center of attention and his dog is terrified.  At school, the faculty and parents consider him a hazard and want him out, the popular kids suddenly take an interest.  His friends are still his friends and the school bully is not impressed.

Poor Charlie!  Adolescence is hard and I bet every tween and early teen can identify with this metaphor for puberty.  The sudden changes in his body have caused friction with his older brother who was always the star and center of attention.  They've also opened up new social opportunities now that the popular kids are noticing him.  His loyal friends, who stuck by him and were always on his side, now find themselves being blown off for people who were never nice to him before.  Sure, no kids I know have ever gone from little kid to green scaly web footed monster, but for a while, some of them have gotten sufficiently monstery.  More pimply and curvy and squeaky and not so much green and scaly.
Posted by JoanneMarie Faust at 12:42 PM