When Will There Be Good News? 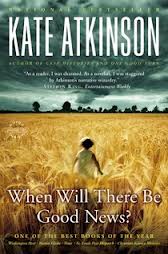 When Will There Be Good News? by Kate Atkinson (Jackson Brodie #3)

The Jackson Brodie stories are all extremely tied knots.  Every story and every character has an impact on every other. By the last page I always find myself  wondering how Atkinson managed to make all those connections and to do it so flawlessly.  These are books that stay with you. Because it all makes perfect sense, I have to trace all the threads from beginning to end.

I am a little worried that I'll give away important connections and mess up the thrill of being witness to Atkinson's sleight of hand.  So, I think I'll give a little bit of character information and I'll let the author take you on that ride herself.

Joanna Mason (now Dr. Joanna Hunter) was five when her mother, sister and baby brother are murdered by a mad man.  Her mother telling  her, just before being stabbed to death, to run, is the only reason she's alive.  She hid in a field, physically unharmed, covered in blood, until she was found by a volunteer. Now Joanna is a doctor, married to a kind of sketchy business guy. She's made a good life for herself and has the unconditional love of her dog and her infant son.  She doesn't share her story with people.

16  year old Reggie is an orphan, living on her own, working for Joanna as a mother's helper and taking care of the one teacher who took an interest in her and her education and is now dying of a brain tumor. Reggie's mother died on vacation with her boyfriend.  Now she's alone. Her brother Billy makes appearances, usually to steal or bring trouble.  Reggie doesn't talk to Joanna about her mother being dead, or about Billy at all.

Jackson Brodie is an ex-soldier, ex-police officer and some time private detective.  His current girlfriend goes on a business trip and while she's away, Jackson goes to get evidence as to whether the son of his ex-wife is actually his, despite what she says.  On his way back home, his train derails and he is severely injured.

To tell you one more thing about any of these characters, I'd start inching down those thoroughly, wonderfully knotted threads.  I usually don't care about spoilers.  You should probably know that about me. In this case, the way the puzzle that is this story is put together is something to be undertaken and enjoyed on your own.
Posted by JoanneMarie Faust at 9:57 AM

I haven't heard of these books before. I found you on Book Blogs and I am now your newest follower! I hope you have a wonderful Tuesday and that you'll stop by for a visit sometime when you get the chance. :)
Leigh Ann
MaMa's Book Corner