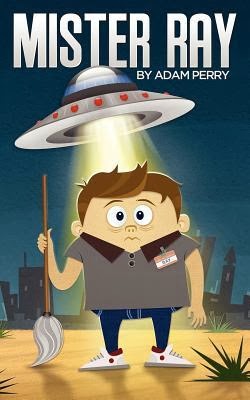 Mister Ray  by Adam Perry
(downloaded as a free kindle book from amazon.com)

I read this as part of the COYER challenge.

I'm not sure if this was intended as a kid's book. It certainly isn't a very complex story. If it had been written in even slightly lively prose, it could have been enjoyable.  Here's a little summary of the story, so you can see what I mean.

Mister Ray is a quiet and insecure man who is mistaken for a man who thinks he's way better than he is.  He is taken to Area 51 and, as Jerry Albatross, the man he is thought to be by his abductors, to make a movie that shows the world what is really going on at the infamous New Mexico site.

I do like that, despite all of his goofiness and his inability to come even the list bit out of his incredibly tiny comfort zone, Mister Ray makes friends, has adventures and rises to the challenges before him. It's definitely a good guys can finish first kind of tale.  The story could have been a lot more fun, and it should have been. The problem was the writing style. It was so stilted and stiff, with short choppy sentences.  It needed a little more life.  Perry did create a place that I would definitely like to visit, and I'm pretty sure anyone reading the book would want Perry's Area 51 to really exist. The silliness involved in keeping the real goings on there a secret was a bit much, even with the reason for it being clearly explained to the reader.

I think the story was pretty interesting.  I liked Ray, even when he was completely, and frustratingly, at the mercy of his insecurities and fears.  As a kid's book, it needed some life in the prose. For a more mature audience, it need to a little more heft to make it captivating and really pull in an audience.  For a free book from the kindle store, I guess I did get a bit more than that for which I paid (I am all for ending sentences with prepositions. Look how oddly formal they are when you avoid them.)

In essence, you could do a lot worse than Mister Ray.  I'd be interested in seeing what else Mr. Perry has up his sleeve.  There's definitely some promise, even with the shaky execution.

Posted by JoanneMarie Faust at 12:37 PM

I found your great blog via Book Blogs! I look forward to reading your posts. Please follow my blog back at http://lorenmathisbooks.blogspot.com/ .

Hi Joanne,
Thank you for the review! As the author of this particular book, I can tell you that it was indeed written for children (ages 8-12).

I have several more books coming out in the near(ish) future and would love to send you free copies when they are available. Please contact me through my google account if interested.
Adam Perry

Adam Perry said...
This comment has been removed by the author.
12:29 PM

Adam Perry said...
This comment has been removed by the author.
12:29 PM