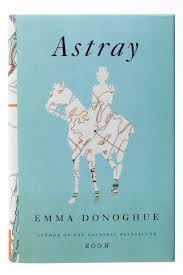 I was one of the people who were wowed by Room.  It could have been a disaster, a story told from the point of view of a five year old boy who has never been out of the room he was born in.  Not only that, but his mother is a kidnap victim and she has spent the boy's short life protecting him from the monster that is his father.  Somehow, she found the right way to tell that story, and that, is truly saying something.

In Astray she tells a series of unrelated stories, all essays distilled from kernels of  true stories.  All of them having in common that the characters have somehow gone astray. Get it?  Clever, right?

There's the elephant trainer at a zoo whose beloved charge is being sold to the circus and his trainer's fight to keep him in England and then, to try to avoid being separated from him.  We also have the story of a man who emigrates to Canada ahead of his wife, to start their new life, leaving the hardships they face, only to fight through new ones in a new land.  Or, the woman who falls on hard times and leaves her daughter in the custody of an orphanage while she tries to get her life together, told through the letters she wrote about her struggles.

The original stories are interesting in their own right.  Donoghue not only brings them to the reader's attention, she also tells them beautifully.  I loved how she gave the information she had about the actual events. The comparisons between the facts and the tales show just how talented a writer and how wonderful a mind the literary community has found with Donoghue.
Posted by JoanneMarie Faust at 10:09 AM

Great Review and thanks for stopping by my blog!

Hi, I'm a new follower from Book Blogs! Check out my blog here Bookish Whimsy, and hopefully you would like to follow back. :)

I've not heard of this book - but it sounds very intriguing! Glad you enjoyed it!